To call Dutch artist Dadara a provocateur touches on only part of what he does as a painter, designer, sculptor and conceptual artist. He might enjoy getting a reaction with his work, but his explorations of the boundaries and absurdities of reality also contain layers of thoughtfulness.

For example, examining finance, Dadara started his own bank as an artist in 2011. The Exchanghibition Bank issued banknotes in denominations of Zero, Million, Love and more. Similarly, commenting on social media and the attention economy, he refers to his Like 4 Real project, which worshipped ‘Likes’ (of the Facebook variety) as a religion that guides people on their spiritual path of Enlikement. In Hourtopia, time also became a currency. With his penchant for critiquing and replicating social structures, his new undertaking is the Beyond Festival, the first edition of which took place May, 2015, in a field in The Netherlands. We spoke with him about the themes that guide his work.

You are now known for a number of different projects. Aside from their conceptual nature, what ties all of your work together?

Looking back there’s definitely a common thread. It’s all about life and humans, and how we as humans interact in this thing called society/life. And we somehow seem to mix up life and society.

You seem to be making some pretty pointed comments about these topics.

Yes, there’s always a message—sometimes hidden, sometimes very clear. It’s not just pretty and visual. I realize more and more that so much stuff in our world has become entertainment. But I think it only becomes interesting when it goes beyond fun. As I read somewhere: “Art focuses our attention. Entertainment distracts our attention.” 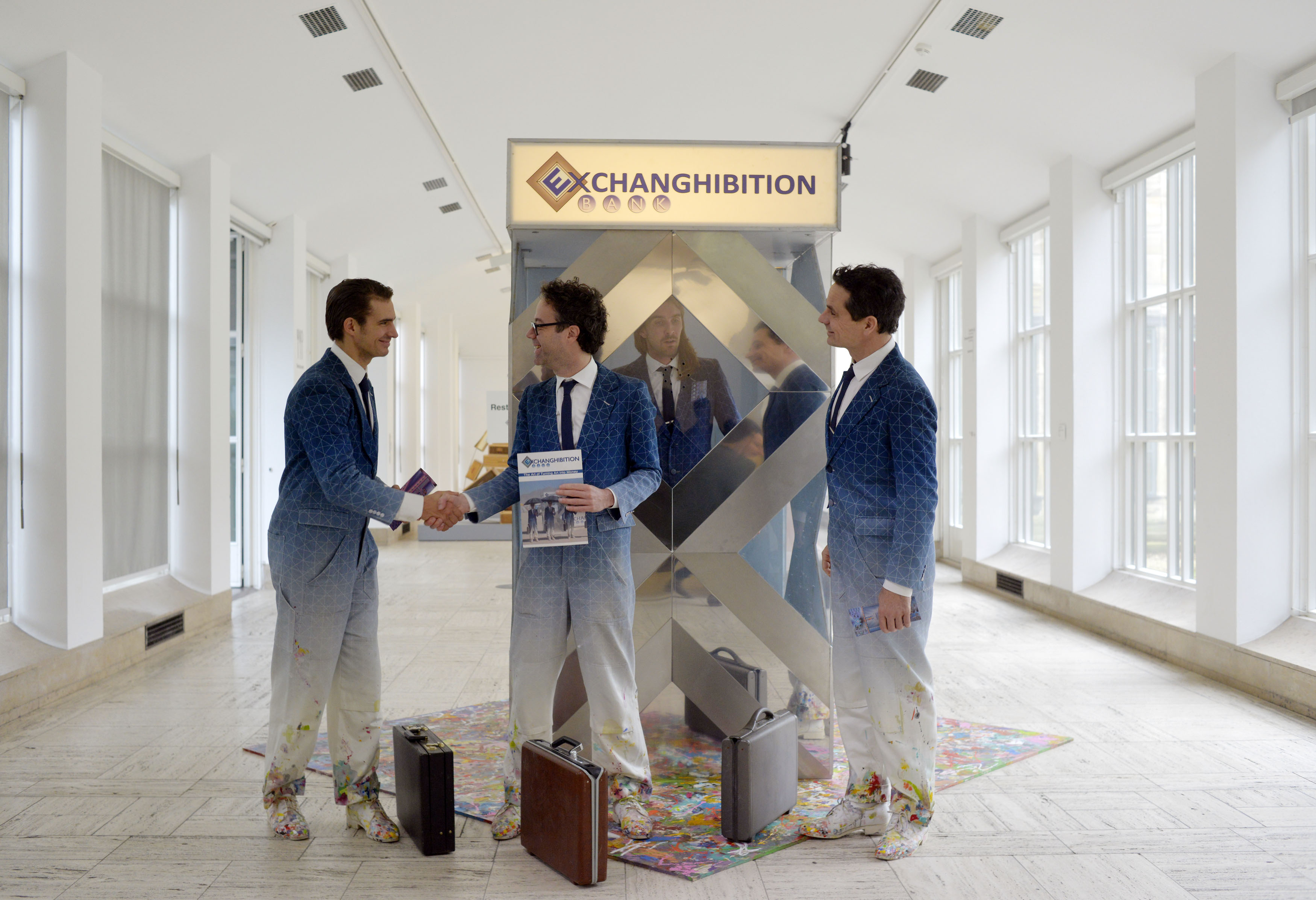 Dadara, as seen in the middle above at a 2012 performance of Exchanghibition in Museum Boijmans van Beuningen in Rotterdam. Exchanghibition issues its own bank notes in denominations of Zero, Million and Love. Photo: Kees Spruijt

Do you think your works have been successful in their messages? What kinds of responses have you received?

It’s amazing how they touch people. And somehow they always seem to be controversial. It’s interesting to see that when a thousand people see your work, you hear a thousand different stories how people interpret them. Often I get goosebumps. Someone recently for instance mailed me and said that if they would die, they would take one thing with them in their grave: the passport they got from my Dreamyourtopia project.

Something that I found impressive about your projects is how large scale they are and the high production values they incorporate. There is a lot of work going into them.

Some projects are really large scale, but it’s not always about scale. Maybe the production value you mention is better. I like both huge and small—sometimes tiny details can have more impact than large scale. Mixing both together, I noticed, works great. The details often make it real for people, blurring the line between fantasy/dream and reality.

It also implies that you have a lot of ‘fine art’ training, in terms of the imagery, designs, etc.

I went to I think six art schools before I was 22. When I was 18 I got kicked out of one art school because of, “total lack of both visual and creative talent.” They advised me to become an accountant. Luckily, I did not listen. I became the in-house artist/designer of my own reality.

But it’s great to see big conceptual works supported by truly talented plastic arts skills, as opposed to being only about ideas. This goes back to the details you mention.

I love the combination of the intellectual and the physical. I somehow also believe in a kind of romantic ideal of being an artist, which also means creating your own imagery and style, and combining that with the conceptual part. All is one.

You must also have a team of people helping you? For instance, I read that your partner is a fashion designer.

Yes. Sometimes I work alone, sometimes it’s fifty people. Going back to your earlier question, at the beginning of this year—with a friend of mine, Eileen Azad—we decided to start a new kind of festival. In four months, without ever having done it before, creating the philosophy and vision and organizing a festival for seven thousand people. But at the same time, I spent hundreds of hours drawing and designing the special passport everyone will get. An extreme form of the huge conceptual and the small intricate details, and working on one with a team and the other yourself. 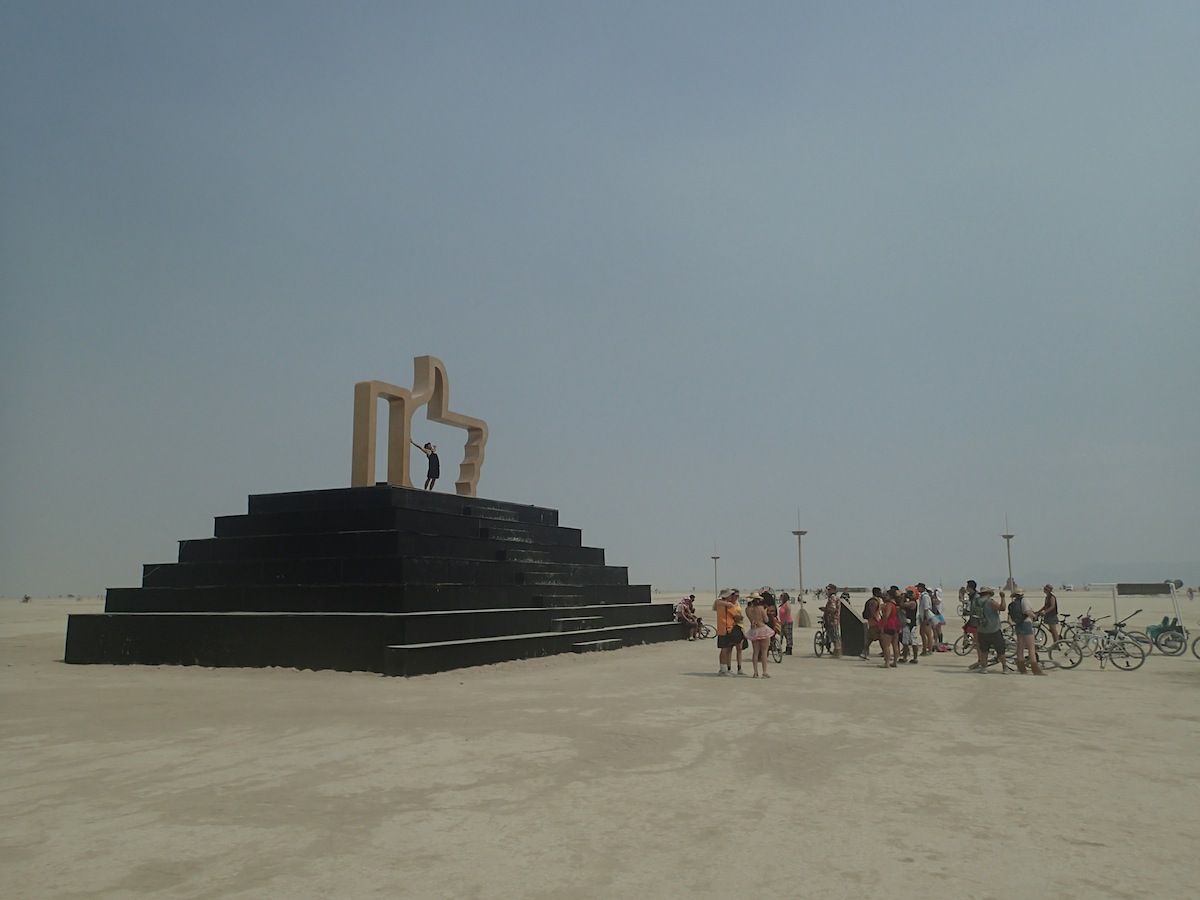 Like 4 Real was a performance and installation which took place at the 2013 Burning Man in Nevada. As per all Burning Man’s contributions, it was burned at the end of the festival. Photo: Courtesy of the artist

I was going to ask about the festival. What’s the concept behind it?

It’s a story, I love stories. The night after we decided to organize the festival, I slept and dreamt some weird dreams—I always dream a lot. And then I woke up at 3AM and wrote a story. It’s about community and connecting people beyond the box they or thers put them in. And as a community it could become a platform for a lot of ideas. Creating your own land, kind of. So next year, we could, for instance, work on creating an alternative currency and start using it at the festival—as I did in theory and conceptually with the Exchanghibition Bank.

Can you be more specific? How do you propose to accomplish these goals within a festival setting?

This first edition is the first seed planted; obviously in four months there is a limit to what you can do. But it already seems we started creating a community, which transcends existing communities/ boxes, such as hippies/squatters/hipsters. That’s a big challenge to go beyond existing communities and try to bring their ideas and visions to a bigger audience. Building bridges with the real world is another thread in my work. With, for instance, the Exchanghibition Bank, we went to museums, to Occupy, to festivals, but also to real banks. Like 4 Real is about the way we connect with each other in this digital age, and became a theater play. But I also gave a talk/performance at The Next Web conference. I hope people for this edition can let go of expectations. That would already be an accomplishment in our nowadays society. We have no line-up, no timetable, etc. It will be about living in the here and now. It will be about connecting with other people without technology—that’s why we have Hu-Fi (Human Fidelity) instead of Wi-Fi. There are a lot of points to address, instead of one as in these other projects. It’s an experiment. I mostly do things because I feel I should do them. I feel if in this stage it would be too crystallized people would have too many expectations, and it would limit the possibilities.

I see that it’s already sold out.

Yes, and thousands of people trying to get a ticket without anyone who knows what it is. I think that’s great.

Is that off the back of your reputation as an artist, you think?

I guess partly. There are people who give me the benefit of the doubt.

You said you have a philosophy in place, and that it’s a story.

Life is a story. But I have the feeling in this digital age, people are more and more turning into digits—predictable. That’s how companies can make money and governments have control. But as Nietzsche said, “Chaos gives birth to a dancing star.”I also feel as if there is an element of prophet or shaman or cult leader in what you do.

I think you are right. Somebody recently told me that festivals have become the new religion. So that means it would be the logical follow up to starting the Like 4 Real cult guiding people on their Spiritual Path to Enlikement. Also, recently in an interview someone called me bank-director/shaman. I loved that combination.

Right. And it also ties into the whole idea of starting a new political space—one that might need a passport.

It’s also about magic. I think our society needs more magic and serendipity.

That goes back to the chaos you mentioned, the unpredictability.

Yes. Because no matter how hard we try to control the unpredictability of life—and it seems we are trying hard to do that in our society—I think it will never cease to be unpredictable. And that’s beautiful. I hope we never turn into a Brave New World. I have read Brave New World and 1984 quite a few times.

It sounds like you should have gone into politics.

Maybe a political party should become my new art project.